I’ve visited the insomniac theater more than I care to admit. The small, creeping hours of the night have left me restless and confused. It is such a strange time to be awake…the middle of the night. When I had an alarm clock with ambulance-red digital numbers, I used to often stare at the moving minutes, counting down the time…”If I fall asleep now, I will get 5 hours…that’s not so bad.” On and on this fever of internal dialogue would go.

I won’t say that I’ve resolved the problem because that would be a lie. However, things have gotten better…until Covidia hit. In the time of the pandemic, I’ve had more trouble sleeping and when I do sleep I have strange dreams that are elusive as water slipping through my fingers. I simply can’t remember them, but they are all filled with angst. I’ve been doing a better job at falling asleep by listening to nature sounds. My favorites are howling blizzards and rushing ocean water. Staying asleep is a bigger problem.

Enter my story treatment. The title of the piece is likely to change; Night_Mar is a little too trite and transparent. My yet unnamed protagonist is a busy, sleepless professional with a Cuban (we’ll get to that in a minute) husband who snores like a broken hacksaw on occasion. So, it is a logical choice for her to choose Mar, a smart device, worn like a chic ear bud, to help her sleep. It has been advertised to her and her co-workers have marveled at its success. They look fresher. So she buys it.

At first, it is all roses, or shall I say, that she has finally caught elusive sleep’s fluff (get it, counting sheep). She is so happy…until…things…take a Turn. I’m still working on this part. Mar becomes the Other woman. She monitors all of the protagonist’s actions, chiding her for staying out late at night on one occasion and possibly reporting her non-compliant behavior to her boss (who is a well-slept person by nature). I’m still working on the details. Perhaps she even enters into the protagonist’s dreams. That would be super cool. When she enters the dreams, she could be the protagonist’s doppelgänger (i.e. the “Other” Woman). I’m thinking of the movie Single White Female for inspiration.

I’ve named the device Mar because “la mar” means the ocean in Spanish and yes, I listen to ocean waves and other ambient noise to help me sleep. Real ocean water is the best and I’ve had the greatest sleep when listening to it, but I haven’t had many of those kinds of vacations.

I also thought back to an old favorite, The Old Man and the Sea, which is set in Havana, Cuba (hence the Cuban husband). There is a rather sexist quote that I particularly love in the book. Santiago, the protagonist, explains the sea to us:

He always thought of the sea as la mar, which is what people call her in Spanish when they love her. Sometimes those who love her say bad things of her, but they are always said as though she were a woman. Some of the younger fisherman, those who used buoys as floats for their lines or had motorboats bought when the shark lovers had much money, spoke of her as el mar, which is masculine, they spoke of her as a contestant or a place or even an enemy. But the old man always thought of her as feminine, as something that gave or withheld great favors. If she did wild or wicked things, it is because she could not help them. The moon affects her as it does a woman, he thought.

I have always loved the italicized language in all its stereotypical glory (stereotypes were meant to be shattered). There is no doubt Mar becomes a bitch in the protagonist’s life. She takes over. She becomes Other, alien, yet more real than the protagonist cares to admit.

Mar senses the protagonist’s rising hate because Mar monitors her cortisol levels, which spike when danger or fright is sensed (thank you “Arkangel” episode of Black Mirror for this information). Mar warns the protagonist of her adrenaline levels and Mar drives her crazy. Insomnia becomes an enemy that Mar gently coaxes back into her life. The situation gets desperate.

In the image of the story treatment I have above, I have embedded the ocean, but I also have copy-pasted a mirror that reflects cracked glass in someone’s very startled eye (I think she is female). The mirror is a metaphor to look for what is behind you. If it is too good to be true, it probably is.

I don’t know what precisely happens yet and I am thinking of ditching the husband in the final story-line. It’s a short, so I don’t want to make things unnecessarily complex. The story treatment I’ve included above will also likely change slightly, it is just a first attempt. I’m excited to workshop this idea and to hear all of my colleagues’ brilliant stories.

For now, I bid you good night. Beware of La Mar. 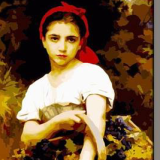 I’m now scared to go to sleep. This is a brilliant concept, with the layers of plot possibilities and the rich use of the sea metaphor.

But maybe not seeing this definition!